Will Bale Twist and Turn Villa's Right Side Into Knots Tonight?

Tottenham Hotspur pays a visit to Aston Villa tonight. Will Spurs continue their current six matches unbeaten form? Tonight’s match at Villa Park is another tough one for Spurs. Villa has only lost once at home this season.

The top four positions are still up for grabs for at least six teams in the Premier League. The boys from White Hart Lane would certainly want to recapture or even better last year’s result. As a matter of fact, they are actually targeting a top three position this season. At the moment, Redknapp’s boys are fifth in the table.

After two straight draws, I think it’s high time Spurs got back into their winning ways. It’s not going to be easy, however. Aston Villa has got an excellent record at home. They’ve so far managed to take points from the likes of Manchester United and Chelsea. They would certainly love to add Spurs into that list.

In the last couple of premier league matches, Tottenham hot shot, Gareth Bale, has been kept somewhat silent. Not that he was not performing. It’s just that he is not getting enough chances to display his masterpiece. Perhaps, tonight we will see him shine once again.

[ad#Google Adsense-2]
However, Bale is not the only player Spurs rely on. They have Luka, Lennon and Van der Vaart. I think it’s safe to say that Harry has one of the best midfield line ups in the league at the moment. When they all click together, they can beat just about any team in the world. Villa’s Marc Albrighton, Eric Lichaj and the rest of the defense will certainly have their hands full tonight.

Are we going to see all four Bale, Modric, Van der Vaart and Lennon at midfield tonight?

Spurs could do well to win this game. It would put them at 30 points. just one point behind Chelsea. Two points behind Arsenal. Chelsea and Arsenal face each other on Monday. A draw between them will certainly make the third and fourth placing race very interesting indeed. 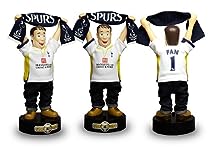 Manchester United seem to have a firm grasp of the premiership lead at the moment. They have a 2 point lead and 2 matches in hand. Still, it’s just coming to mid season. Half of the season more to play. The race for top four is still very much open.

Can the Spurs fans even dream of landing the league title this year? I’d say.. Why Not?

However, for tonight, I’m going for Spurs winning it by 3-1. What’s your take?

Come On You Spurs!